A sump pump that runs continuously will wear out quickly and be more susceptible to malfunctions. It is also more likely to overheat if the pump always operates without water in the pit. If the sump pump fails, your basement is prone to flooding and extensive water damage. You should address this issue as soon as possible since it is a major cause of sump pump failure. Sometimes the appliance runs ALL THE TIME because it works TOO hard.

Why Does My Sump Pump Keep Running?

If you hear your sump pump running, that’s a sign it’s working and pushing water out of the sump pump pit. However, if it continuously runs and not from the amount of water entering the pit, there’s an issue with the system.

When the sump pump constantly cycles, it can wear out the motor and decrease the system’s service life. There are three areas you should inspect to fix this problem: the float switch, check valve, and discharge pipe. You may have one of the following problems if you see your sump pump running continuously:

The most common cause for your sump pump to run continuously is a defective float switch. The float switch sends a signal to the controller when the water level rises above or dips below a certain point. If the sensor fails to send a signal, the controller will turn on the sump pump without any warning so that it can push more water into the pit.

Check valves are used to prevent the backflow of liquid while the pump is operating. A malfunctioning check valve can result in a continuous cycle of the sump pump. This situation can occur if the check valve gets stuck open or closed or if the ball inside the check valve isn’t moving correctly. As soon as you find a problem with the check valve, replace it immediately because damage to the equipment can cause serious injury.

A leaking pipe can also lead to your sump pump running constantly. A leaky pipe usually occurs after a flood, but it can happen due to other causes, such as tree roots that get caught up in the pipe. If you suspect a leaky pipe, try to locate where the leak is occurring. Once you do, clear the area around the pipe and reposition it, so it doesn’t interfere with any utilities. 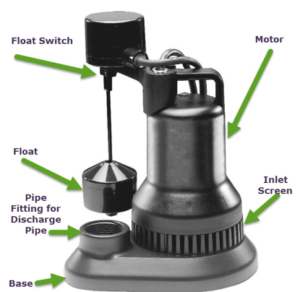 if your sump pump is small enough, it might not be able to handle the increased flow rate caused by a flood. In addition to being unable to contain the extra flow, your sump pump won’t be able to provide enough suction to pull air through the hose and create a vacuum. These two factors combined would increase pressure against the check valve, which would keep the pump activated.

How to fix this:

Find out how large a sump pump you need:

Look at the sump pump’s performance:

If your sump pit is blocked, the water flowing into it will take longer than usual to fill up the pit. If the water continues to fill up even though the pit is full, then the sump pump must work harder to draw water out of the pit. Eventually, the pump will fail and stop working.

How to fix this:

6. The Water Table is High:

In addition to blocking the water from entering, high groundwater levels can also force the pump to work excessively. Even if the sump pit is filled, the pump won’t have enough power to keep pushing water out.

One of the impeller blades may break off or become bent. When the blade breaks off, it can get trapped under the casing, preventing the shaft from turning properly. When the shaft becomes jammed, the pump won’t be able to operate. Because the broken blade is lodged inside the housing, repairing it requires replacing the entire sump pump.

Why do sump pumps fail?

The main reason for failure is overloading. Overloading happens when too much wastewater to push out of the pit. It can also happen when the pit is flooded repeatedly, causing corrosion.

As mentioned earlier, a clogged drainpipe can also overload the sump pump. However, the most common culprits of sump pump failures are blockages. When drains get plugged, they trap debris, including leaves, twigs, and other plant matter. Over time, this material builds up and eventually blocks the pipes completely, making them impossible to unclog.

Overloaded pumps can cause several problems:

What Causes a Sump Pump to Short Cycle?

A short cycle occurs when the pump stops running after flooding but gets restarted automatically once the water level drops below the float switch. This issue usually involves damaged wiring or plumbing that prevents the pump from shutting off correctly.

How Do I Fix A Sump Pump That Shuts Off Automatically?

You should check the wiring first. Ensure that all connections are tight and that there aren’t any loose wires floating around. Also, make sure that there isn’t an open circuit anywhere in the breaker panel. If everything is fine, the next step would be to troubleshoot the wiring between the sensor and the control module. Turn on the sump pump via the control module and see if it runs. If it doesn’t, then the sensor must not be working properly. You will then need to replace the sensor with another one. If the sump pump still does not turn on after replacing the sensor, you will need to contact your local electrician. They might be able to help you figure out the problem.

How Often Should a Sump Pump Run For?

When a sump pump is needed, it should only operate. It should only work when the water level reaches a certain level, activating the float switch. Many factors can affect how often a sump pump runs, including where your property is located and if wet weather is common in your area.

If you think that your sump pump has stopped operating normally, you may have some issues to address. The first thing that you should consider is why you’re having issues. Are you overloaded? Is there something wrong with your wiring? Has the drainage pipe become blocked? Is there anything else preventing your sump pump from performing as expected? You will want to consider these things before contacting a professional plumber about your problems.